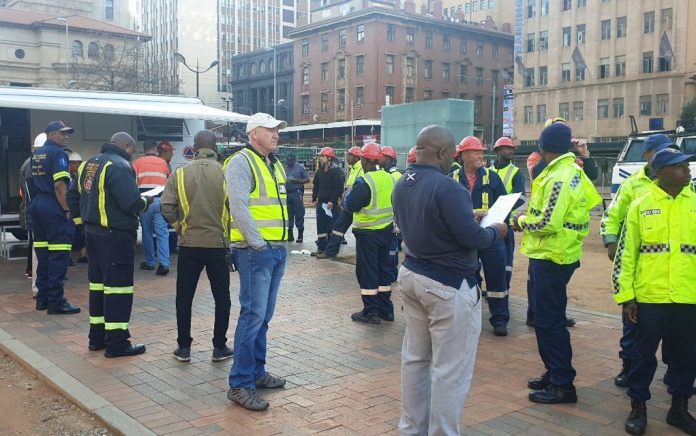 The Drone Guards team was privileged to be part of the bank of Lisbon building demolition, which took place on Sunday 24 November 2019.

The swift evacuation of nearby residents started in the early hours of the morning. Drone Guards provided aerial security surveillance from a vantage point outside of the exclusion zone. This was to ensure the area was clear of residents by the time the implosion took place at 09:00.

News24 reported that the Gauteng provincial government instructed that the building must be demolished. Assessments showed it was structurally unsafe, following a fatal fire in September 2018, during which three fire fighters lost their lives.

We could not help but spare a thought for those fallen, and their loved ones, who we understand viewed the implosion from nearby.

This was a spectacular collaboration between many teams. In fact, the Jet Demolition professionals planned this project for months. One can only imagine the amount of stakeholders and city authorities involved in planning such an event.

And that became evident at 05:00 on Sunday morning, when the Drone Guards team arrived at the Vehicular Operations Centre. SAPS, City of Johannesburg EMS Disaster Management, Emergency Medical Services, Fire Safety Services and the F.I.R.M guarding team were all present for the briefing by the jet demolition safety manager.

Drones in the air

Ensuring the exclusion zone was clear of people before the implosion countdown began, was the first priority; inspecting roofs and roads by drone. The crowds gathering for spectator value also became evident however.

It was then that SAPS and the F.I.R.M team created additional radio communication with the drone team. This was to ensure the safety of the spectators, reporting on any suspicious behaviour from a birds eye view.

Another drone team, situated on an adjacent building, were tasked to record the implosion for Jet Demolition. They had three drones in the air around the implosion site. Therefore close coordination between Drone Guards’ drone operations and theirs, was key.

It was an extremely successful day all round. Everyone walked away safely and no incidents were reported. The Drone Guards team were able to record this moment the building went down. What a day.

Special thanks to Wayne Dawson, Chairman of the Board at Forum of Integrated Risk Mitigation (F.I.R.M. – JHB), and his team and to Ade Ashaye from African Penthouses for access to their building roof top.

The video footage can be viewed here. All eggs in one basket?